By Zephyr ProjectSeptember 7, 2021No Comments

I’m happy to announce that we have completed the work to upgrade ZMK to Zephyr 2.5!

A big part of this work was some major refactors and improvements by innovaker to our zmk-docker Docker image and GH Actions automation. 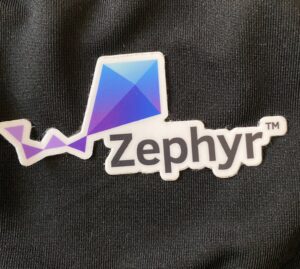 In addition, petejohanson did the upgrade work to adjust ZMK for the Zephyr changes.

Use the following steps to update to the latest tooling in order to properly use the new ZMK changes:

Existing user config repositories using Github Actions to build will pull down Zephyr 2.5 automatically, and should work, fine as is. However, to upgrade to the newer Docker image, you should:

If you created your user config repository a while ago, you may find that your build.yml file instead references a zephyr-west-action-arm custom GitHub Action instead. In this case, the upgrade is not as direct. We suggest that instead you re-create your config repository to get an updated setup using the new automation approach.

If you build locally using VS Code & Docker then:

Once the container has rebuilt, VS Code will be running the 2.5 Docker image.

The following steps will get you building ZMK locally against Zephyr 2.5:

From there, you should be ready to build as normal!

Thanks again to innovaker for all the hard work, and to all the testers who have helped verify ZMK functionality on the newer Zephyr version.